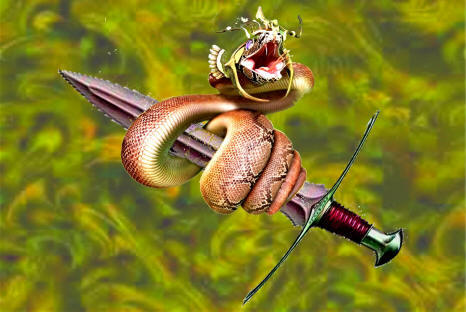 ELLIOTT L. VERE | VISION OF THE SWORD AND THE SERPENT

This is the vision/revelation. I was in the midst of a great meeting hall (a church), and the walls and ceilings were covered with jewels and ornaments, and the windows were made of colored glass. The hall was full of people, some rich, some poor, some sick and crippled, mute and blind; but all had chains on and were hand-cuffed, and no one was free.

In front of the meeting hall was a large platform, with a pulpit on one side and a large cage on the other, with a huge green serpent in it; and hanging over where the speaker would stand, was a great sword suspended by two strings horizontally; and on the platform were several ministers, 8 or 10, clothed in clerical robes, sitting one behind the other, one seated just a little above the other.

The assembly looked upon these men and they looked upon the church. There was silence for a while, until a thundering voice sounded from the pulpit as if it came directly from God, saying, “Who will declare the whole counsel of God?” And the first clergyman arose with a Bible in his hand, and when he did, the old green serpent uncoiled and stretched out hissing against the man with sparkling eyes and protruding fangs; and the man of God, falsely so-called, sank back into his seat and placed his Bible under the chair. And when the serpent stretched up his head and touched the sword, he said to that man, “Anyone who obeys the voice of God, I will kill with this sword.” And for a little while, there was silence again.

And then the Voice sounded from the pulpit again, “Who will declare the whole counsel of God?” And then the second man in clerical robes arose as if he would step forward, and again the serpent uncoiled against him, and he tumbled back with fear and sat down and placed his Bible under his chair (hiding the Word). The serpent again touched the sword, and with the same remark said, “I will kill you if you obey the voice of God.”

Then a man of little stature (meaning he was nothing in the sight of the world), ascended the platform and stood under the sword, and he lifted up his eyes toward heaven and said, “Into Thy hands O God, I commit my spirit.” Then he opened the Bible and read. He didn’t add anything to It, and he didn’t take anything from It; he read the Word and spoke like a man having authority. And when he had finished, the old serpent stretched up to the edge of the sword and cut off one of the strings holding the sword in place and the sword swung down and missed him and passed over his head; because he was a man of “little stature”; and the weight of the sword made the other string to break, and the sword swung back and pierced the hearts of those clergymen who were lined up and nailed them to the wall. And a great scream of despair sounded from the pulpit, but an even greater cry of joy sounded from the assembly, for every man’s chains were loosed and they were set free!

When this vision had vanished, I saw another vision of the Savior in a cloud, just above my head. He spoke saying, “Hear My son the meaning of these things. The meeting hall which you saw is the secularized church, having a form of godliness, but denying the power thereof. They are all covered with the jewels of the joys of this world, and there is no end to their silver and gold. The people which you saw, are those for whom I died, but My people are destroyed for lack of knowledge; they have eyes, but they do not see; they have ears, but they cannot hear. They are truly in bondage and must be set free!”

“The platform in which you saw, on which the clergymen were sitting; the platform is the preconceived ideas, having their origins from the pit of hell. The pulpit is the throne of God; and the serpent, old Lucifer himself. The sword which you saw, is the Word of God; and the strings on which it was hanging, mean the power of the Word to give life or the power of the Word to take life. Life was given to the man of little stature and life was taken from the clergymen that did not preach My Word! The clergymen that you saw, are men (& women) from every church who pretend to know Me, but they teach My people things which are not written in the Book of life; and their pride and their presumption and their worldly spirit force them to obey Satan, who is a liar and the father of lies; and each of the clergymen try and exceed the other in elegance, in extensive writings, argumentation and the like; but they only consider the “letter” of the Word, and leave out the “spirit” of the Word. And the day will come and now is at hand, when they shall all perish, just like these.”

And I opened my Bible and read, “Woe unto the shepherds that destroy and scatter the sheep of My pasture, saith the LORD. (Jer.23:1) In the prophets I have seen a horrible thing, they commit adultery and they walk in falsehood: (a perversion of the Word of God) and strengthen the hands of evildoers. (Jer.23:14).”

Jesus said, “At the end of days you shall understand this. Woe to the shepherds that feed themselves, should not the shepherds feed the flock! (Ezek.34:2). The weak you have not strengthened, nor have you healed the sick, you’ve not bound up that which was broken, and neither have you sought that which was lost, but with harshness and with rigor have you ruled over them. (Ezek.34:4). I will destroy the fat and the strong shepherds, and I will feed them with judgment. (Ezek34:16).”

Then He said to me, “That these false shepherds shall in no wise escape when the sword falls upon them. But My sheep must be warned, they must be set free!”

And again He said, “Do you remember My words in the prophecy of Jeremiah in the latter part of chapter 25? Read it!”

Then He said to me, “These days shall come quickly, the shepherds shall howl, yea, there shall be weeping and gnashing of teeth; but when the sword has fallen it will be too late forever. The man whom you saw who was of little stature, is every man and woman who will humble himself or herself, and be obedient even to the death of the cross, putting his or her trust in God, and going forward declaring the whole counsel of God! Oh, if I could find such a man, can you tell Me where there is one? With such a man I could shake heaven and earth, saith the LORD.”

What is the Keswick movement, and is it biblical? 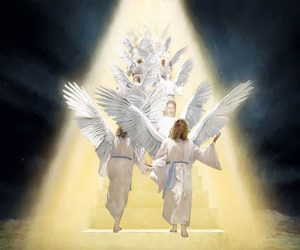